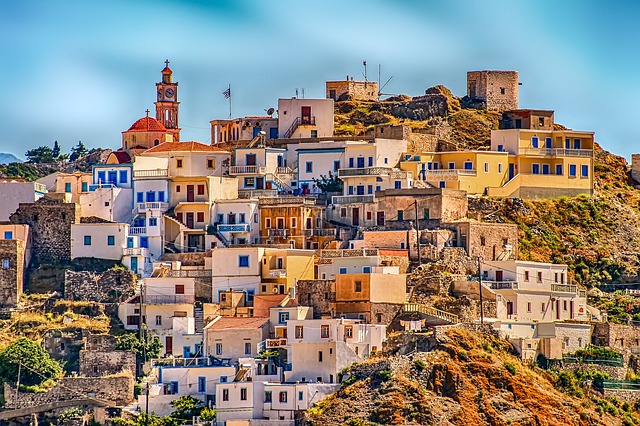 Top 10 Places to Visit in Greece

Greece is known for its stunning ancient ruins, whitewashed villages, blue seas, delectable cuisine, and kind people with lots of places to visit and mouth-watering attraction sites. It’s no surprise that Greece is one of Europe’s top travel destinations, there are numerous memorable places to visit in Greece. However, it’s because it’s so beautiful here that tourism exists in the first place.

The many scattered islands that dot the Greek mainland like little gems in the surrounding seas are often breathtaking. Each one has its own unique collection of breathtaking views, historical attractions, nighttime activities, and cultural experiences to enjoy.

There are several of these to discover. From the west Ionian islands, such as Kefalonia and Corfu, to the eastern Aegean Sea, with Mykonos, Santorini, Kos, and Rhodes among others. Then there’s Crete’s pre-Hellenic Minoan culture to the south. On the mainland, there are plenty of excellent places to visit in Greece. The Meteora monastery, Delphi ruins, and then Athens’ iconic Parthenon are all well-known attractions in Greece.

What are the Best Places to Visit in Greece?

Here’s a List of Some of the Top 10 places to visit in Greece with the most attractions and things to do during your holiday:

Meteora is one of the best places to visit in Greece. In the north-central mainland of Greece, the Meteora rocks rise more than 1,200 feet (366 meters) into the air and offer spectacular views overlooking the villages of Kalambaka and Kastraki. The historic monasteries perched along the summits add to their majesty. The monasteries at Meteora were erected by monks seeking spiritual seclusion and freedom from religious persecution during the 14th and 16th centuries.

Thessaloniki is Greece’s second-largest city and the nation’s capital for the Macedonian province of Northern Greece. This vibrant metropolis is Greece’s cultural capital, with lively festivals, social gatherings, and a fast-paced nightlife. Thessaloniki has both old and new attractions, including ancient city walls, the White Tower, Turkish baths colourful food markets, museums, and art galleries. The nightlife in Thessaloniki is unrivalled. From tiny tavernas to nightclubs and other entertainment options, Thessaloniki has everything you need.

Zagori is a mountain wonderland. A beautiful part of northwestern Greece that features stunning geology and two national parks. Its deep forests and steep slopes are furrowed by powerful rivers, which are dotted with ancient villages with magnificent stone homes dating from the late 18th century. Hiking the numerous routes linking the settlements is the greatest way to appreciate the region. The breathtaking Víkos Gorge is one of the most accessible and rewarding destinations in Zagori.

Cape Sounion, located on the southernmost tip of the Attica peninsula, is best known as the location of Poseidon’s ancient Greek temple, which was destroyed in antiquity. The remains are perched on a headland and are surrounded by the sea on three sides. Day trips from Athens include a stop at Cape Sounion, where visitors can watch the sunset over the Aegean Sea from the ruins.

Halkidiki is a trident-shaped peninsula adjacent to Thessaloniki. With excellent beaches, it’s Halkidiki’s trident-like peninsula. The three separate peninsulas may be broadly summarized as follows: Sithonia offers the beaches, Kassandra has a beautiful nightlife, and Athos has the monks. Kassandra is more developed than Sithonia because it is closest to Thessaloniki, but it also has campgrounds, secret bays, and clear waters. Both are popular among Greek and Eastern European tourists. Mount Athos’ easternmost section belongs to the monastic community. It’s only accessible by boat and available to male pilgrims only.

Read also: Top 10 Places to Visit in Europe in Summer

Delphi is Greece’s most visited archaeological site, second only to the Acropolis in Athens. Delphi was once regarded by the ancient Greeks as the planet’s center. Dedicated to Apollo, Delphi was a major oracle site. People would journey to this sacred area to consult with the priestess on a range of issues including farming, relationships, and politics in ancient times. The Temple of Apollo, the Athenian Treasury, the theater, and the hippodrome that once hosted events of the ancient Pythian Games are just a few of Delphi’s significant ruins and constructions.

Peloponnese, which is shaped somewhat like a leaf, was formerly known as Morea, which means “mulberry leaf” in Greek. Peloponnese is a large peninsula linked to the mainland by the Rio-Antirrio bridge and located in the southernmost area of both Europe and Greece. Venetian fortresses, Byzantine churches, and Mycenaean palaces are among the ancient ruins scattered across Peloponnese, which references its lengthy history. Olympia is one of these ancient monuments where the first Olympic Games were held in honour of Zeus.

Crete is the second-largest Greek island and a wide, beautiful land of diverse contrasts where scenery ranges from magnificent coast to rugged mountains and rolling hills dotted with olive groves. Bustling metropolises stretch beyond peaceful villages centered around outdoor cafés. Steeped in history, Crete continues to preserve archaeological traces of numerous civilizations that have inhabited it over time.

In the north-central mainland of Greece, the Meteora rocks rise more than 1,200 feet (366 meters) into the air and offer spectacular views overlooking the villages of Kalambaka and Kastraki. The historic monasteries perched along the summits add to their majesty. The monasteries at Meteora were erected by monks seeking spiritual seclusion and freedom from religious persecution during the 14th and 16th centuries.

Athens, which has been inhabited for more than 3,000 years, is widely recognized as the birthplace of democracy and the cradle of Western civilization. The city offers a perplexing mix of ancient and modern features. Athens is famous for its archaeological ruins and monuments, including the renowned Acropolis, Parthenon, Ancient Agora, and Theatre of Dionysos. However, Athens isn’t only about ancient ruins.

Top 10 Things to do in Peckham and Places to Visit

Greece is a beautiful travel destination with lots of fun things to do to keep you and your family entertained throughout your holiday. As a beginner, you could use these travel tips to help you stay safe throughout your vacation. Save this list of destinations to visit in Greece for your next vacation.

Top 10 Places to Visit in Europe in Summer